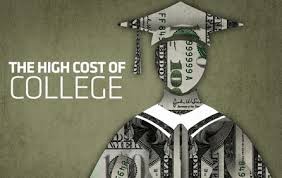 Recently, the Department of Education released a memo saying that it vastly overstated the student loan repayment rates for most colleges. The new figures suggest that at more than 1000 colleges and trade schools (about a fourth of all schools), at least half of the students are in default or have failed to pay down any of their loans in the last 7 years. This shouldn’t surprise anyone who has had to put a kid through college or is planning for one.

The costs associated with higher education have grown enormously over the years. Historically, college costs have outpaced inflation 2 to 1. 20 years ago, those percentages translated to dollar increases most families could tolerate. Now, those annual percentage increases are adding up to laughable amounts.

Because of this, colleges have created a confusing, and often subjective, patchwork of pricing plans. Nearly 60% of students at public universities don’t pay full price. And 88% of students attending private four-year institutions pay less than the sticker price. The average tuition discount at private schools is 55.5%.

These are just averages, though. In truth, schools that can charge higher prices generally do. Most colleges, however, can’t charge as much as the most elite institutions can and pose interesting choices.

Top private research universities, elite liberal arts colleges and top state research universities for nonresidents routinely charge the most. These high-ranking schools can charge more because their cachet attracts more (often quite affluent) applicants to these schools. When the supply (limited freshmen slots) is out of whack with the demand, prices rise and keep climbing.

Here are some pricing examples of this phenomenon at public universities that are popular with out-of-state and foreign students. Because of the draw their brand names command, the following schools are among those that can charge the same inflated prices as some of the best private schools:

The same dynamic is at work at the University of Arizona, which is very popular with Californian residents, and its next-door neighbor University of New Mexico, which doesn’t have the same draw. UNM’s cost of attendance is $15,071 cheaper than Arizona’s.

Most colleges and universities offer price discounts, but the schools most in demand can dispense smaller merit scholarships with tougher requirements. For instance, the University of New Mexico offers nonresident scholarships worth nearly $15,000 a year to students with a score of 23 ACT (1130 SAT) and a 3.5 GPA. In contrast, at the more popular University of Colorado at Boulder, a nonresident would typically need a 29 ACT with a GPA of at least 3.85 to get a $6,250 scholarship.

Many people mistakenly think that expensive schools are simply better and worth paying the premium. That’s just not true. The quality of education that students receive will mostly depend upon the academic major that they pick and how strong or weak that school’s corresponding academic department is. Another important consideration is for a student to earn their non-major credits at a much cheaper institution and spend the big bucks later in their academic career on the courses related to their major. After all, does it really matter where they took their freshman English?

Seven in 10 seniors (68%) who graduated from public and nonprofit colleges in 2015 had student loan debt, with an average of $30,100 per borrower. This represents a 4% increase from the average debt of 2014 graduates. It’s quite understandable why young people today are nervous about their future.

The future role that traditional colleges will play in society is bound to change because of technology and economics. However, those changes are going to evolve over years. In the meantime, students and parents can greatly influence these costs with a lot of homework and some strategic planning.