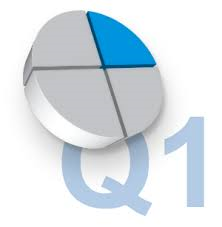 If you had vacationed on a remote island for the first quarter of this year and hadn’t read the news, you’d be inclined to think it was a pretty boring three months. The majority of the major U.S. stock averages finished the quarter within two percentage points (positive or negative) of their starting values. The S&P 500 was up 1.35% while the Russell 2000 was down 1.52%. Similarly, the Dow Industrial Average was up 2.2% and the NASDAQ declined 2.75%.

But as we all know, the markets were anything but calm. The year immediately started off with losses and bottomed out in mid-February with most averages down roughly 10%. From that point, stocks marched steadily higher and retraced all of the losses. It felt as though we’d had a whole year’s worth of trading activity compressed into three months.

As we have written over the past few months, the declines were driven by a number of factors. Most important of those were the sharp decline in oil prices, more downward revisions in China’s GDP and finally the first move by the Federal Reserve to raise interest rates.

The market’s sentiment change came in mid-February as new realities came to light. The Fed’s pace of future interest rate hikes was going to be much slower than initially believed. Federal Reserve comments successfully talked down the U.S. dollar, increasing U.S. corporate profit expectations. Oil prices rallied as the path to more balanced supply and demand came into focus. The European Central Bank announced plans to be more aggressive in their quantitative easing program which boosted European markets and shifted the focus away from China.

Looking past the quarter’s volatility, the markets currently seem reasonably valued. Interest rates are low by historical standards and we expect them to stay that way throughout the year. Treasury yields across all maturities are still extremely low, but compared to interest rates around the world and in the U.S., bonds look cheap. The Federal Reserve has made it clear that they are going to continue to increase the Fed Funds rate which will certainly create a headwind for stocks and bond. What the first quarter has shown us is that they are willing to be flexible in the timing of these increases.

Stocks finished 2015 with very modest gains due to the same issues we see today. But valuations, as measured by price-earnings ratios, now seem more reasonable. Added to that, we now have a little more clarity on some of these issues that have been plaguing the markets for many months now and can see a clearer path to improved earnings later this year. Our hope is that this will lay the groundwork for better returns in the second half of this year.

If the first quarter taught us anything, it is that the markets will always test investors’ resolve. If you watch the markets and your portfolios every day, the volatility can tempt you to change course at just the wrong time. It is important to remember that the stock market doesn’t move up or down in a straight line, but the long-term direction is upward. Keep a long-term market perspective on your financial plan and let it work for you over time.